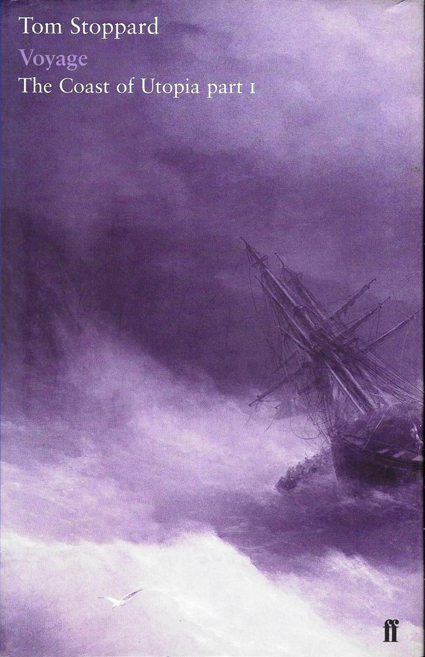 A Map to Tom Stoppard’s Circuitous ‘Coast of Utopia’ Trilogy

In “The Coast of Utopia” Tom Stoppard throws his arms around a subject so big it cannot be contained in a single play. Chekhovian in spirit, and Tolstoyan in scale, it requires three linked plays, more than 70 roles and a fictional time span of more than 30 years to cover the politics, the literature and the tangled personal relationships that animated Russia in the mid-19th century.

The historical allusions fly thick and fast, and the names, in most cases, are less than familiar. Most audience members will vaguely recall that Mikhail Bakunin, the central figure in “Voyage,” which opens Monday at the Vivian Beaumont Theater at Lincoln Center, was an anarchist. Beyond that, probably, nothing. The novelist Ivan Turgenev requires no introduction, but the Socialist Aleksandr Herzen and the literary critic Vissarion Belinsky do. Belinsky dominates “Shipwreck,” the second part of the trilogy, and Herzen takes center stage in “Salvage,” the third and final installment. If ever a play required a reading list, “The Coast of Utopia” is it. So let’s get started.

Three remarkable books shed a crystalline light on the turbulent world that Mr. Stoppard dramatizes. The first is “Russian Thinkers,” by Isaiah Berlin. It is a collection of lucid, elegant essays that survey the intellectual terrain. The second is “The Romantic Exiles,” by the British historian E. H. Carr, an almost novelistic treatment of the fevered relationships that bound, and in some cases destroyed, the lives of several of the main characters, notably Herzen, his close friend and journalistic collaborator Nikolai Ogarev, and Bakunin. The third book is “My Past and Thoughts,” Herzen’s impassioned, witty, beautifully written account of his childhood on a vast country estate, his student days at Moscow University, his exile in the far reaches of European Russia and his life abroad as a political agitator and journalist.

As “Voyage” begins, in the middle of the 1830s, a new generation of Russian aristocrats assumes an oppositional role to the dead hand of czarism. Members of this elite are inspired by the ideals of the Enlightenment and the Decembrists, the reformist army officers who staged a revolt against the czar in 1825. Although immediately crushed, the Decembrist uprising became a symbolic rallying point for idealistic young Russians. Mr. Stoppard’s heroes are stifled by the dark autocracy of Nicholas I, mortified by their country’s cultural backwardness and morally outraged at the continued existence of serfdom, but they are powerless to speak out or to act because of the far-reaching powers of the censors and the Third Section, the secret police.

Berlin describes, with admirable clarity, the temperament, the ideals and the conflicts of this new generation, whose members, deprived of a free press, tended to cluster in discussion groups. One of the most influential was the circle that gathered around Nicholas Stankevich, a central character in “Voyage.” Stankevich, a sweet-tempered, intellectually gifted student at Moscow University, drew around him a coterie of disciples, including Bakunin and Belinsky, who feasted on the often obscure language of German romanticism as expressed in the works of Fichte, Schelling and Hegel, to whom they gave themselves heart and soul. The Stankevich circle, oriented toward Germany, had its counterpart in the circle that gathered around Herzen and Ogarev. Their North Star was Paris and the political ideals of the French Revolution.

Intellectual debate was normally conducted at white heat, and discussions routinely lasted until the break of day. The flavor of the period is well captured in “The Extraordinary Decade,” the memoirs of Pavel Annenkov, who knew everyone worth knowing and left memorable character sketches of Herzen, Belinsky, Gogol, Turgenev and, last but not least, Bakunin, the manic central figure in “Voyage.”

A sower of chaos, an inveterate mooch, an idealist of unflagging energy, “a figure at once subhuman and superhuman” in Carr’s words, the charismatic Bakunin made an indelible impression wherever he went, without achieving much of anything in the way of practical results.

Mr. Stoppard, in his depiction of Bakunin, relies heavily on Carr’s lively biography, “Michael Bakunin.” Published in 1937, it focuses on Bakunin’s character rather than his ideas, such as they were. The recently published “Bakunin” (Thomas Dunne, 2006), by Mark Leier, a labor historian and anarchist, offers a highly sympathetic account of the man and his ideas. It was Turgenev, however, who drew what may be the most compelling portrait of Bakunin, casting him as the main character in “Rudin,” a novel steeped in the romantic atmosphere of the 1840’s. The likeness is imprecise. For artistic purposes, Turgenev endowed the title character with the fatal flaw of irresolution, a trait entirely absent in Bakunin. “Rudin” also contains a stand-in for Stankevich, reverently portrayed in the character of Pokorsky.

Literature as much as politics defines the world of “The Coast of Utopia,” and the two cannot be separated in 19th-century Russia. Debates about the future of Russia and its place inevitably returned to its writers, the great poets and novelists who burst forth in the 1830s and 1840s. In “Voyage” the conversation is crowded with references to Pushkin and Gogol, whose achievements were broadcast by Belinsky, a fiery critic whose articles were devoured word by word by a readership starved for ideas and for political discussion that, in Russia, could happen only in the realm of literature.

Open discussion of ideas, in the myriad journals of the time, invited the heavy hand of the censor to come down with a rude bang. This happens, in “Voyage,” to the Telescope, which publishes a series of letters by Pyotr Chaadayev (rendered Peter Chaadaev in the play) bemoaning the backwardness of Russian culture. Another time-honored means of keeping reformist political ideas alive was to sneak them into seemingly unrelated material. This was the approach taken by the historian Timofei Granovsky — a character in “Shipwreck” — in his lectures on medieval history at Moscow University

It was literature, however, that counted as its own country, an ideal Russia to which thinking citizens could proudly claim allegiance. “Only our literature, in spite of barbarous censorship, shows signs of life and forward movement,” Belinsky wrote in a famous rebuke to Gogol, who late in his career took a conservative turn. That is why, he added, the Russian people see in their writers “its only leaders, defenders and saviors from the darkness of Russian autocracy, orthodoxy and nationalism.”

Pushkin hovers as a shimmering specter in “Voyage.” Pushkin’s “Eugene Onegin” and his fatal duel weave in and out of the conversation. Gogol’s second collection of stories, “Mirgorod,” has just been published, but his name has not yet traveled to the hinterlands. “Who’s Gogol?” one of Bakunin’s sisters asks. The young Turgenev is, as yet, nothing more than an aspiring poet. In the subsequent installments he will be the celebrated author of “A Sportsman’s Notebook.”

All the above make valuable background reading, although Pushkin presents problems to which I propose an unorthodox solution. The sparkle and the pathos of Pushkin’s poetry disappear in translation. Flaubert, after reading Pushkin in French, turned to Turgenev and announced, “He’s insipid, your poet.” There are many translations of “Eugene Onegin.” Some are quite decent, and one is perverse: Vladimir Nabokov’s relentlessly accurate version with superb notes appended. None suggest why Russians go weak at the knees when Pushkin’s name is mentioned. There is a work that does, but it is not a translation of Pushkin. It is “The Golden Gate,” Vikram Seth’s 1986 novel in verse that uses the “Eugene Onegin” stanza form and carries off the trick brilliantly.

Turgenev’s “Fathers and Sons” explains many of the conflicts in the third part of Mr. Stoppard’s trilogy. Its portrayal of the ruthless, scientifically minded radicals of the 1860s measures the political distance that his characters travel over 30 years. The romantic idealism of Rudin evolves into the harsh, contemptuous realism of this later novel’s Bazarov, which has no time for the likes of Herzen. The two extremes are represented by Belinsky and Nikolai Chernyshevsky, also a literary critic, prominent in “Salvage,” whose utilitarian view of art paves the way for Soviet Socialist Realism and the iron rule of cultural commissars. His portrait is painted in acid colors by Nabokov in “The Gift.”

Truly diligent students will want to read Herzen’s “Letters From France and Italy, 1847-1851” and two of his most famous essays, “From the Other Shore” and “The Russian People and Socialism.” And extra credit will be awarded for delving into two books by Aileen M. Kelly, an intellectual historian in the tradition of Isaiah Berlin: “Toward Another Shore: Russian Thinkers Between Necessity and Chance” and “Views From the Other Shore: Essays on Herzen, Chekhov, and Bakhtin.”

That should do it. You are now ready to see the plays.