[ .. ] Spain is attempting to thwart the movement for Catalan independence through the use of a legalistic Catch-22. The central government says Catalan nationalists must respect Spain’s constitution. And that constitution makes it illegal to hold a referendum on independence.

The British are taking an approach that is simultaneously more pragmatic and bolder. Prime Minister David Cameron could easily have insisted that only the British government had the legal right to organise a referendum. Instead he has agreed to allow Scots to organise a vote on their nation’s future – on condition that independence should be the only question on the ballot.

On the grounds of both justice and prudence, the British government’s approach seems wiser. Mr Cameron, like Mariano Rajoy, the Spanish prime minister, is a conservative and a patriot. Both men would be appalled to preside over the break-up of their nations. But the British government has recognised that, by winning power in Edinburgh, the Scottish Nationalists have earned the democratic right to hold a referendum on their longstanding goal of independence. There is no point in trying to find legalistic ways of thwarting them.

The British government’s approach, while risky, is also psychologically astute. Telling people that there is something that they are absolutely forbidden from doing is a sure way of stoking their desire to do that very thing. This principle – first established in the Garden of Eden – applies just as surely in modern Catalonia. By contrast, it may be slightly deflating for Scottish Nationalists that a recent opinion poll showed stronger support for Scottish independence in England than in Scotland itself.

The economic crisis within the eurozone has led the Scottish Nationalists to play down the European angle to their campaign. They now say that an independent Scotland would not immediately seek to join the euro, and would instead retain the pound as its currency – in Scottish notes, as it is now.

Spain, by contrast, is right at the centre of the euro crisis, so the rest of the EU still looks good by comparison. Most Catalan nationalists insist their new nation would remain part of the euro.

There is, however, one big difference between the Scottish and the Catalan cases that helps to account for the difference in attitudes in Madrid and London. Scotland accounts for just 5.2m of a total British population of about 62m – and is widely regarded in England as being heavily subsidised by the rest of the country. (The Scottish Nationalists dispute that.) By contrast, Catalonia accounts for 7.3m of a Spanish population of 47m – and is one of the wealthiest regions in the country. Its loss would be a terrible blow to Spain.

Still, even the English might find their stiff upper lips quivering slightly if Scotland really does vote for independence in 2014. Personally, I hope both Britain and Spain manage to stay together. But, if that happens, it has to be on the basis of consent. The Spanish government should stop hiding behind the law, and allow a Catalan referendum. No marriage can survive simply by declaring divorce illegal…  Gideon Rachman, Financial Times, 15 / 16 octubre 2012, Spain, Britain and the forbidden fruits of independence. 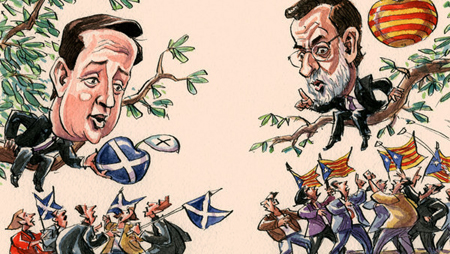