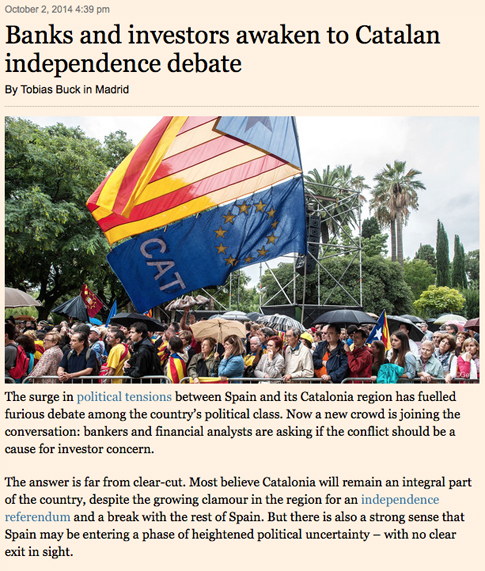 By Tobias Buck in Madrid

The surge in political tensions between Spain and its Catalonia region has fuelled furious debate among the country’s political class. Now a new crowd is joining the conversation: bankers and financial analysts are asking if the conflict should be a cause for investor concern.

The answer is far from clear-cut. Most believe Catalonia will remain an integral part of the country, despite the growing clamour in the region for an independence referendum and a break with the rest of Spain. But there is also a strong sense that Spain may be entering a phase of heightened political uncertainty – with no clear exit in sight.

Concerns about the impact on business and investment dominated the debate in the run-up to Scotland’s recent independence referendum – providing a last-minute boost to the No camp.
In Spain, the discussion has not yet registered on markets themselves. Yields on the country’s debt are close to historical lows and shares in bellwether Catalan companies have continued to perform well. According to senior Spanish officials, this proves that fears of a big rift between state and region are overblown: “You see no reaction in the markets. Why? Because the markets believe that nothing will happen,” says Cristóbal Montoro, the Spanish budget minister.

Such assurances, however, have done nothing to damp the interest of investment banks, credit rating agencies and business consultants. The recent flurry of research reports and economic papers analysing the Catalan situation suggest the conflict is rapidly moving up their agenda.

One sign of heightened concern came late on Monday, just hours after Spain’s constitutional court formally suspended the Catalan government’s plan to hold an independence referendum on November 9. Fitch, the US credit rating agency, issued a statement warning that it was putting Catalonia on watch for a ratings downgrade as a result of the “increased tensions” with Madrid.
The move attracted attention because Spain acts as something of a financial guarantor for its regions, and has repeatedly stepped in to provide funding for cash-starved regional governments – including Catalonia’s. Suggesting that the financial link between Catalonia and the state could weaken in the months ahead implies that a political rupture is no longer unthinkable for investors.

That same day, Morgan Stanley published a 20-page report on Catalan independence, the latest in a string of investment banks to examine the theme. It concluded that a Spanish break-up, either through a managed exit or by unilateral Catalan action, was “rather unlikely”. But it also warned that Spain faced a period of heightened uncertainty regardless of whether the planned referendum goes ahead.
“This is negative for sentiment – consumer, business, investor – and the key near-term issue, we think. Business investment and financial flows may be particularly affected,” Morgan Stanley said.

Some argue that tensions are already chilling investment. “Investors are enormously worried,” says Jaime Malet, the chairman of AmChamSpain, the US chamber of commerce in the country. “Many companies are asking if we are entering into a dynamic where there will be a constant battle with the Spanish state. They ask: Will my investment be safe or not?”

The debate has left Catalan leaders in a bind. In political terms, the fact that analysts and bankers are starting to take the independence issue seriously is a form of validation.

Yet the Catalan government must also be careful to avoid a situation where the region’s status as a hub for business and finance is called into question. Officials in Barcelona insist that, despite the recent tensions, there is no sign that the region is losing its allure as an investment destination. According to data from the Catalan industry ministry, the region has attracted more than €190m in foreign investment so far this year – a third more than in the same period last year.

“The political dynamic is separate from the business dynamic,” says Antoni Grau, the ministry’s director-general. But with tensions rising by the day and no political compromise in sight, businesses are increasingly wondering if that can last.