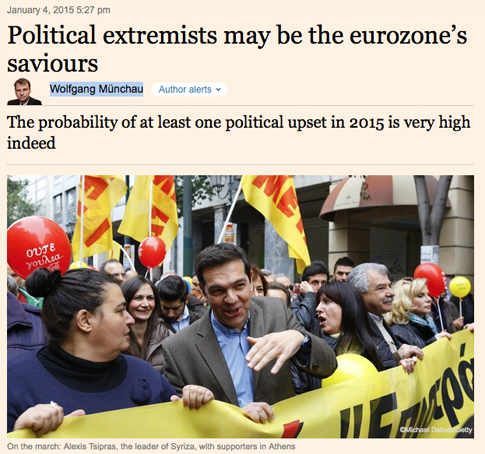 Political extremists may be the eurozone’s saviours

This is going to be the year in which the eurozone will have its moment of truth. Three scheduled elections — in Greece this month; in Portugal and in Spain in the second half of the year — will tell us whether the EU’s approach to crisis resolution works politically or not. The probability of at least one political upset is very high indeed. In both Greece and Spain, parties of the hard left lead the polls.
In Greece, the political choice is essentially between the status quo of fiscal austerity and an alternative of negotiated debt default. The economic argument for the second course of action is compelling. Greek debt runs at 175 per cent of gross domestic product. The country does not need to service all that debt right now. Greece pays no interest on the “official” debt from the EU until 2023. But this is only eight years away — well within the horizon of any long-term investor.

The official EU policy towards Greece is best described as debt forbearance — of recognising a debt problem, and delaying the inevitable. It is also the policy of Antonis Samaras, the Greek prime minister, and his coalition government. It is a version of extend-and-pretend: extend the loans, and pretend that you are solvent. The history of international debt crises tells us that these strategies are always tried, and always fail.

Now, add deflation to this mix. From this month onwards, eurozone headline inflation rates could turn negative, due to the most recent fall in the oil price. Deflation raises the real value of debt, and could push Greece over the brink.

Unfortunately, the only party that makes a convincing case for a debt restructuring is Syriza, a party of the radical left. While Syriza is right about debt restructuring, it is also disingenuous by ruling out a eurozone exit. If you advocate debt restructuring, you would need to answer the question of what you would do if the negotiations fail. The choices then would be either to revert to the status quo — in which case there would be no point in voting for Syriza — or leave the eurozone, and unilaterally default against foreign creditors. But this is precisely what Syriza has ruled out. Syriza has the right instincts, but may not have the right policies.

Such lack of consistency matters because Angela Merkel in particular appears willing to call Syriza’s bluff. Der Spiegel reported over the weekend that the German chancellor is willing to risk a Greek exit if its next prime minister were to abandon the current policies. In other words: the only way for Greece to restructure its debt would be to leave the eurozone.

Greece is in this position because its economic depression started earlier than elsewhere. Its depth is similar in scale to the US depression in the 1930s, but without the subsequent recovery. The world is better equipped today than it was 80 years ago to handle a serious depression. But unless the depression is followed by a substantial and sustained recovery, political systems convulse, which is what is happening in Greece right now.

Spain appears stronger when viewed from the outside, but it is politically just as vulnerable. Spain’s gross domestic product rose at annualised rates of around 2 per cent in the second and third quarters of 2014. I suspect this is because Spain applied less austerity than other periphery countries. But one has to put those recent numbers into perspective: Spanish real GDP is down from €1.1tn in 2007 to €1tn in 2013. Even the nominal GDP has not yet recovered to 2007 levels.

My preferred indicator for the continuing eurozone depression is not the rate of unemployment, but the rate of employment. The former does not capture the large number of disheartened people who have simply dropped out of the labour market altogether. The Spanish employment rate fell from 66 per cent of the employment-age population to 56 per cent between 2007 and 2014. In Greece that number is below 50 per cent. With existing policies, Spain and Greece have no chance of reverting to normal levels of economic activity within a generation.

Debt is what holds back Greek and Spanish growth. The Spanish private sector needs a debt restructuring as badly as the Greek public sector. As in Greece, only a political party of the hard left — Podemos — offers a policy of debt restructuring. In both countries, there is now a sufficiently strong body of public opinion to realise that without a debt restructuring there can be no recovery in output and employment. This is why radical parties are succeeding.