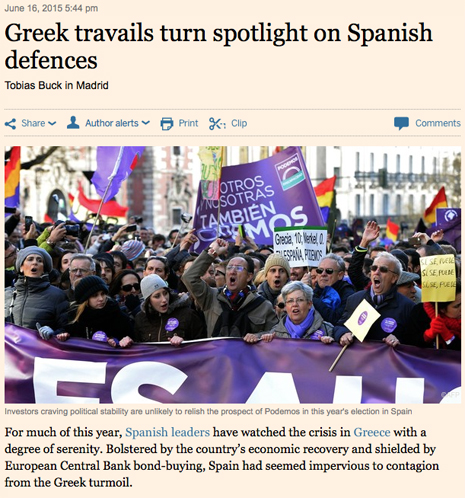 For much of this year, Spanish leaders have watched the crisis in Greece with a degree of serenity. Bolstered by the country’s economic recovery and shielded by European Central Bank bond-buying, Spain had seemed impervious to contagion from the Greek turmoil.

But since Monday that sense of safety has been thrown into question as investors focus less on Spain’s recent economic performance and more on what it -and countries such as Italy, Portugal and Ireland- have in common with Greece.
Bonds issued by such peripheral eurozone countries have been wracked by volatility this week, with Spain’s 10-year benchmark borrowing costs hitting their highest levels since August last year.

“The major uncertainty for the Spanish economy now is the external context,” said Jordi Canals, the dean of Iese business school. “Spain has profited a lot from low interest rates and from the relative stability in the rest of the eurozone. Any disruption, for example Greece leaving the euro, is a threat -especially for a country like Spain, with high unemployment and high debts.”

According to the IMF, the Spanish economy is on course to grow by more than 3 per cent this year, making it one of the best-performing in Europe. Yet Spanish bond yields have performed worse than Italy’s this week, suggesting investors are concerned above all about political uncertainty.

Spain’s conservative government faces a tough election campaign this year, marked by the rise of Podemos, a new anti-austerity party that is allied with the Syriza government in Greece.
“The political future of Italy is more or less clear. But in Spain you have a leftwing anti-austerity party that is running very strongly in the polls,” said Ignacio Molina, European affairs analyst at the Instituto Real Elcano, a think-tank in Madrid.
Antonio Roldán, Spain analyst at Eurasia Group, the risk consultancy, added: “Our view is that contagion will be limited, mainly because of the European Central Bank and because Spain’s economic fundamentals have changed. But there will definitely be some contagion because Spain shares some of Greece’s structural weaknesses, to a lesser extent -including high government debt and a degree of political uncertainty.”

The direct financial impact of a Greek default on Spain is almost certainly manageable, said Peter Schaffrik, chief macro strategist at RBC Capital Markets. “The thing that is relevant for Spain is that investors might start to think: the Greeks have gone down this road. Why should it be different for Spain? They have high government debts. They have Podemos. They have an election coming up. I think it is an unlikely scenario -but the case can be made,” he added.

Since Syriza took power in January, the Spanish government has been among its most implacable eurozone critics -in part because Madrid has invested so much politically in being the textbook reformer.

The sense that Spain and other eurozone countries were walled off from Greece is one factor that may have given Greece’s creditors more confidence about taking a hard line against Athens in bailout negotiations. In Germany, in particular, many officials believe the eurozone can withstand a Grexit without disastrous consequences.

Spanish officials insist that Spain -along with the rest of the eurozone- is much better prepared for a Greek default or the country’s exit from the single currency zone than two years ago. But they also point out that there is no desire to see Greece fail in order to weaken Podemos at home. “Our interest is very clear: we want Greece to stay in the eurozone,” a senior government official said.
Despite the recent spike in bond yields, most analysts agree that the parallels between Greece and Spain today only go so far. Podemos has done well in some recent polls, but the party’s chances of emulating Syriza and leading the next Spanish government are seen as exceedingly slim. Another crucial difference -both with Greece and with the situation in Spain three years ago- is that the country’s banking system has undergone a thorough clean-up. Dozens of entities have been merged, the government has injected more than €60bn in fresh capital, and the sector as a whole has gone through a series of stress tests.

For the embattled Greek government, meanwhile, the latest market jitters may offer at least a crumb of hope. Syriza leaders have argued for months that the failure to secure a deal with Athens would also hurt other eurozone countries. Up to a point, bond investors seem to agree.

“This is good news for Syriza. These signs of contagion could help them in the negotiations,” said Mr Molina. “Spain has to be more careful.”