FIRST it was spend, spend, spend. Now it is tax, tax, tax.
[ .. ]
Still, Mr Zapatero is performing a U-turn. In previous years he cut the top rate of income tax, slashed company tax and brought in a populist €400 ($560) annual rebate for all Spanish taxpayers. But that was when Spain was booming. The latest data shows that GDP is shrinking by 4.2% annually. Spain also has Europe’s worst unemployment, at 18% and climbing.
Respite will not come soon. Spain’s recession, made worse by a burst housing bubble, is different from those of other European countries. Some economies are already starting to look up, but Spain’s will not recover for another year. The construction industry is in tatters and, with hundreds of thousands of unsold new houses, is not about to recover.
[ .. ]
Mr Zapatero shows little appetite for long-term spending cuts of the kind that countries such as Britain are starting to think about. He looks as if he is storing up problems for the future. [ .. ] 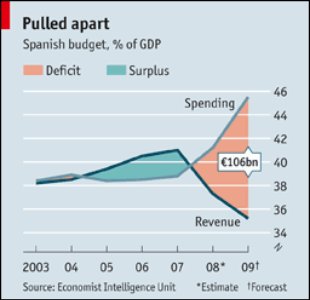