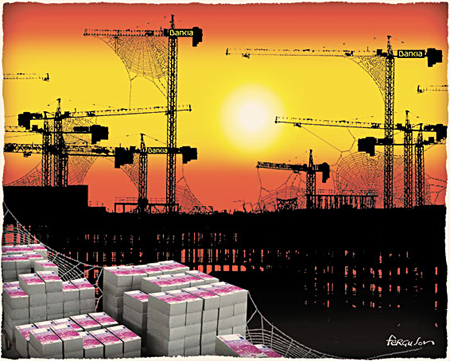 Lord knows how Spain will get Bankia, its troubled savings bank conglomerate, out of its €19bn mess. But, for once in the crisis that has been unfolding since 2007, anyone can grasp how it happened.

Despite the enormity of Spain’s problem, this crisis is a refreshing change. It doesn’t involve wholesale deposits, collateralised debt obligations, or structured investment vehicles – or even an investment bank. It is the kind of fiasco that always brings down banks.

Bankia and the troubles of Spain’s other cajas are a repeat of the US savings and loans crisis a quarter of a century ago, which cost $100bn. “Real estate lending became the fashion, the ‘new’ banking idea of the times,” William Seidman, who as head of the Federal Deposit Insurance Corporation tackled the S&L crisis, later recalled.
[ .. ]
The International Monetary Fund, which has had to bail out Ireland, was sanguine when it inspected both countries in 2006. It warned about credit growth but found that Spain’s banks were “highly competitive, well-capitalised and profitable . . .  they would be able to absorb losses from large adverse shocks without systemic distress”.

Confidence that things cannot go disastrously wrong is common in credit booms. “This was a plain vanilla property bubble, compounded by exceptional concentrations of lending,” wrote Klaus Regling and Max Watson in their 2010 report on Ireland’s crisis. Any analysis by supervisors “should have sounded alarm bells loudly”.

One alarm bell for Spain was the similarity between its savings banks and the S&Ls. The latter were mutually owned local banks that were supervised under a mixture of state and federal charters and expanded rapidly into commercial property lending due to deregulation. By the mid-1980s, half of their assets were property loans.

The Spanish banks exploited a similar regulatory confusion and some were pushed by local governments to make loans. Moody’s estimates that 23 per cent of lending to the Spanish private sector last year consisted of property and construction loans. Avoiding over-concentration in property loans was the main lesson of the crisis in the early 1990s, not only in the US but also in Scandinavia and the UK. Most banks worked hard to improve risk management in order to avoid the trap again. Yet this lesson was soon forgotten.
[ .. ]
Yet the Bank of Spain, like other regulators, did not stop the bubble of the early 2000s getting out of control. Most regulators took the view of Alan Greenspan, the former chairman of the Federal Reserve, that they might warn of dangers but should not intervene.

In future they need to act like Asian bank regulators, which are unafraid to be dirigiste in limiting deposit-funded lending institutions. The Hong Kong Monetary Authority, for example, adjusts the loan-to-value ratios under which local banks can make mortgage loans to mitigate property bubbles.
“The critical catalyst causing the institutional disruption around the world can be almost uniformly described by three words: real estate loans,” Mr Seidman remarked of the 1990s crisis. Yet a decade later, supervisors became sure that banks could best judge how much to expose themselves to property.

The problem is Spanic, not Grexit.